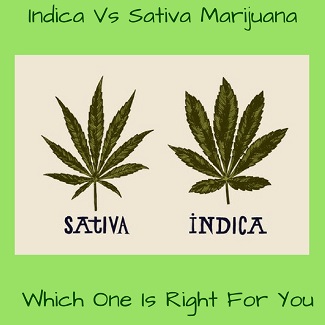 Indica Vs Sativa Marijuana – Which One Is Right For You

Those of you who are familiar with marijuana know that there are three types of marijuana. We have the Indica strain, the Sativa strain and the Hybrid. Is one strain better than the other or do they both address the same problems. We need to look at this battle of the marijuana strains. Following we shall look at Indica vs Sativa marijuana and see if one better than the other or are they both relatively the same with only minor differences.

Let’s take a look at the Indica strain. When I first got my marijuana license, the nurse told me that when trying to distinguish between the two to think of the phrase “in the couch” to describe the effect of Indica marijuana. The phrase conjours up the image of someone relaxing on the couch. So if are looking for something to help you relax and to help you sleep she recommended an Indica strain.

Another characteristics of the Indica strain is the plant’s appearance itself. The Indica plant originated in the mountains which is a colder climate. To overcome the harsh climate the plant is short and bushy with wide leaves. These characteristics make them better for growing indoors.

Another trait of an Indica strain marijuana plant is that the medicine produced from this plant have higher CBD and lower THC count.

Sativa marijuana is the other main type of marijuana. The Sativa strain originated in much warmer climates. Sativa can be found in Columbia, Central America and Southeast Asia which are countries close to the equator. The plant has long narrow light green fan leaves and can grow quite tall. This is not a plant for the inexperienced grower as it has a long flowering period and it can grow quite tall making a pure Sativa almost impossible to grow indoors for the home grower. Also, the long flowering period make the plant more at risk for pests and diseases. Spider mites love this plant so growers need to be ever vigilant in watching for these pesky interlopers.

Medicinal marijuana from a Sativa strain tend to be high in THC. This gives the user a stimulating and uplifting high.

So who would be the typical user of Indica Marijuana? A person who is going to try growing marijuana for the first time should probably try an Indica strain. As mentioned earlier this strain originated in cold mountainous region so it can withstand a lot thus making it easier to grow. This plant is also good for someone trying to grow their crop inside. A person looking for that feeling of relaxation and also looking for a sleep aid might also be an Indica user.

So we have looked at the typically user of Indica Marijuana who is the typical Sativa User? A person who is a Sativa user may also be an experienced grower of marijuana. I say this because most strains of Sativa are harder to grow than Indica. The plant also can grow quite high unless you are familiar with certain methods to overcome the height and then be able to grow inside. If you suffer from depression, ADHD, fatigue or mood disorders than you may want to try the Sativa type. Since Sativa will give you that uplifting feeling and a boost of energy it is best used during the day. It can also increase a persons’ focus and creativity.

There is another type of marijuana that is becoming more and more popular and that is the Hybrid. When marijuana was first discovered and before human intervention there were about 60 different strains of marijuana. Looking to grow plants that a user could benefit from some Sativa effects and Indica effects people began to crossbreed certain plants. Before this you could say that a Sativa plant was high in THC and Indica leaned more towards CBD. Now with crossbreeding that is no longer true.  The line between Indica vs Sativa Marijuana is now not so clear.

Growing marijuana has become a fine science. Depending on where you get your information from some say there are over 2300 unique strains while others say it is more around 779 known strains. It is hard to keep track since growers are always experimenting and coming up with a new hybrid strain.

Some of this crossbreeding has led to some awesome strains of marijuana. The first one that pops into my mind and I imagine many others is Charlotte’s Web. This strain was developed to help a young girl named Charlotte who suffered from severe epileptic seizures. She was experiencing 100’s of seizures a week. She still has seizures but they are way down to just a handful a month so because of this she can now live a fairly normal life.

So What Is It Going To Be?

As you can see your choices for marijuana has increased since hybrid strains have become more popular. Some people who are looking for relief without too much of a high now have more to chose from with the different hybrid strains. Those that are in the marijuana industry are continually experimenting with different plants. This in the long run will be good for those of us that do believe in the medicinal value of marijuana and as they continue to create more hybrids they are more than likely going to come up with strains that will help more people.

So if you are not sure which is better for you discuss it with your doctor. With his help and knowledge you will have an easier time coming up with the right type of marijuana for you. 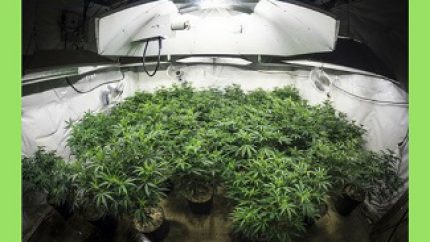 Marijuana And Lights – A Special Bond